Westerly Magazine (issue 64.1) has published a creative non-fiction story of mine, ‘The Whiter the Socks’ about my grandmother (babcia) and her time at Hohenfels Stalag 383 displaced persons camp after WWII. 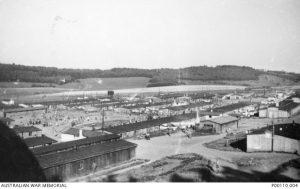 Babcia has sun-splotched hands, with skin that stays peaked after it’s pinched. She says it’s because she’s old and the skin has lost its spring. I think it’s because she carries too many secrets around and they’ve made her hands heavy.

The cow stood, body long to the wind, nose twitching. Dusk fell over the valley and a white frost crept up each blade of grass until the rolling green became rolling white.

The young lad raised his eyebrows as the older man tossed cloth into his hands. ‘What are these?’

‘Socks. To keep her hooves quiet.’

‘Yes. Haven’t you ever put socks on a cow before?’